The blog posts for tonight and for next week will be kind of special;
The blog celebrates its 3rd birthday, today is Christmas day, and next Friday will be the 1st day of 2016!

So, for today we shall have a Christmas special, Cuban style!

Christmas is celebrated all over the world, and is quite the party when in comes to Cuba (as usual 🙂 ).
As always, Cuban holidays are known for great quantities of food & drink, music and dancing, all in a great gathering of friends and family.
In Cuba Christmas eve is called “la Noche Buena”, the good night.
Christmas day is a day of grand family gatherings and reunions, decorating, gift giving, and of course, a mutual many hour long cooking session!

In Cuba the main dish for “cena de navidad” is el puerco asado, or lechon asado (respectively, the roasted pig and the roasted suckling pig).
During the day before Christmas eve, a pig is selected, slaughtered, cleaned and placed in a special marinade for a day. It is roasted by many family members at the backyard the next day.
Other typical dishes at the table include moros y cristianos, which is a dish of seasoned black beans on a plate of white rice, mariquitas, fried platano slices in mojo sauce, mojito and cider to drink and pudin diplomatico (pudding) or rum cake for desert.

As mentioned, there’s no Cuban holiday without some great music!
So, tonight we can enjoy a few nice festive holiday songs of traditional Cuban musical genres such as Son, Bolero, Mambo and Son Montuno!

As you might have already guessed from my posts during the previous few weeks, NG La Banda is one of my favorite bands. 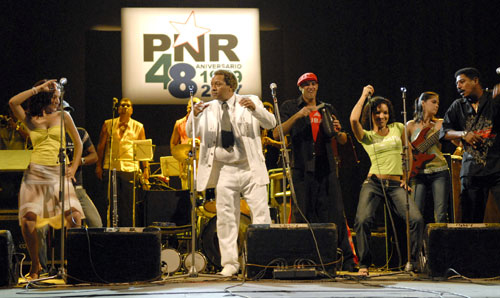 The band credited with the formalization (or even complete genesis, as some claim) of Timba as a musical genre has many facets, and its super talented members do other stuff as well, such as presenting their own interpretations of traditional classics or composing and executing sizzling jazz numbers.

The album “Bailemos”, from which this songs comes, and came out in 2007, is a good example of NG’s versatility;
The albums is interpreted by NG La Banda, but all songs are by Juan Almeida, Cuban vice president (up to his death in 2009) and one of the original commanders of the popular Revolution in 1959!
This prominent politician was also a wonderful song writer, and over the years composed over 300 songs! 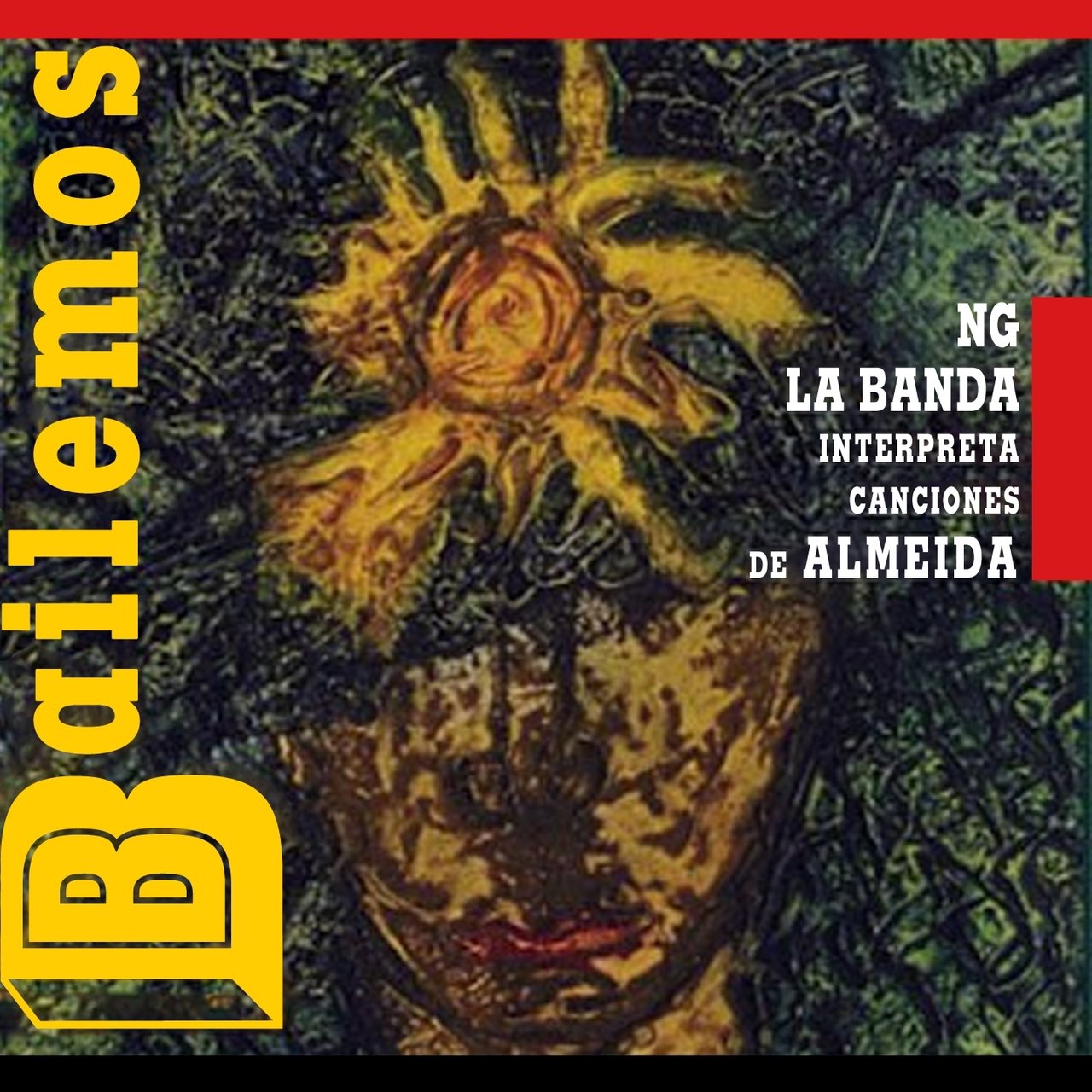 The albums is pretty much traditional Cuban music, well flavoured by the unique style of virtuos playing and singing of La Banda Que Manda.

Any aficionado of any musical genre must have probably come across the following situation at least once:
You have so many records \ CDs \ music on your computer that with time you start forgetting the older stuff you have! 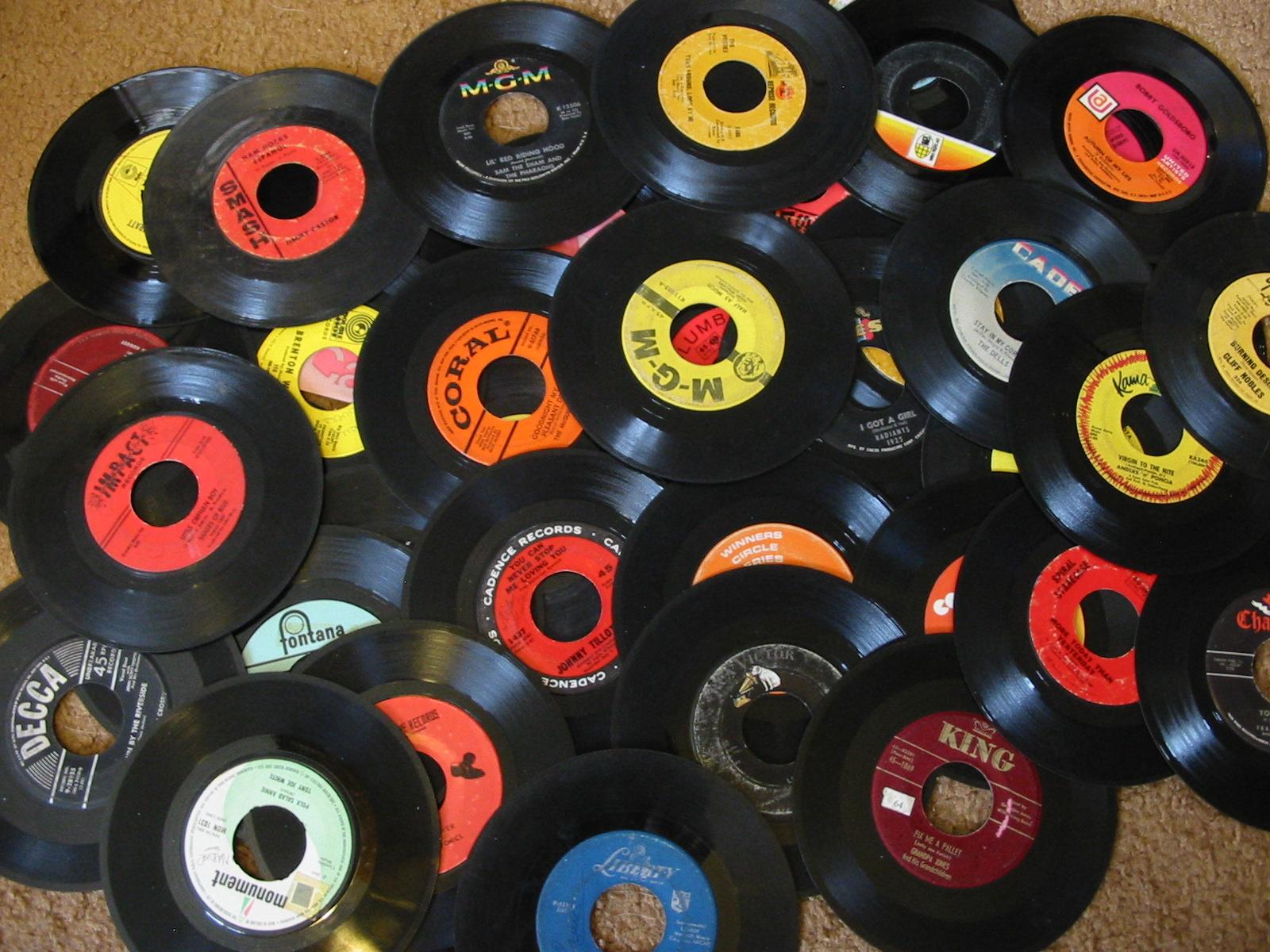 This is exactly what has been happening to me during the last week or so;
I have been listening to the discographies of several of the best Cuban bands since the days of the revolution, including NG La Banda, the band to which most experts attribute the definition of Timba as a musical genre (el Tosco, by the way, was the first one to use the name “Timba” for the wonderful musical genre we all love so much…) . 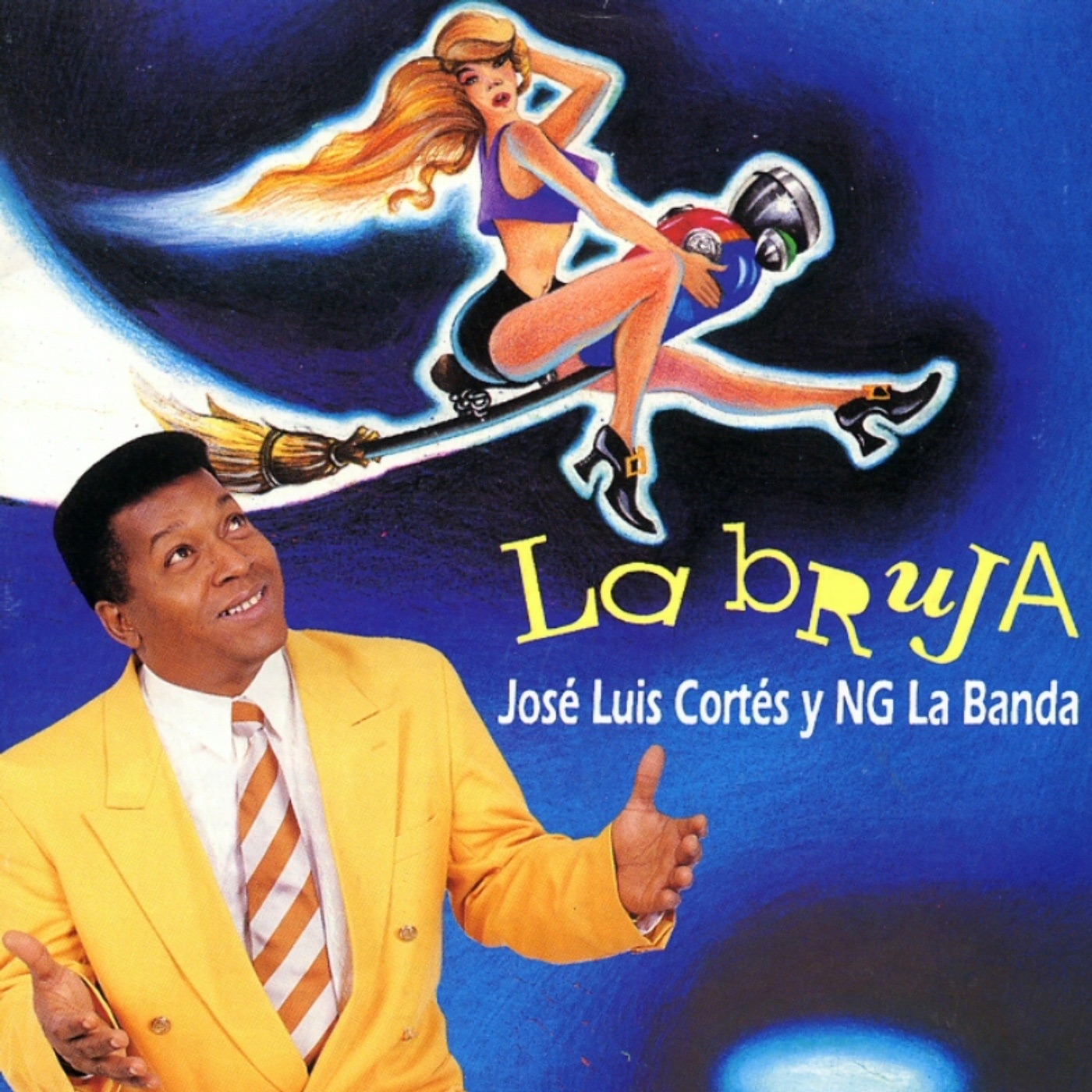 The song I gladly present you today is from the ingenious 1994 album “La Bruja”;
This album is full of eternal masterpieces and gems such as “te pongo mal”, “ya llego la hora”, “marinero soy”, “picadillo de soya” and the title track (“la bruja”).

The track we “un sueno terrible”, which I present you today, is a bit less known, but nevertheless a wonderful composition with a nice story told by the beautiful voice of Tony Cala, the 1st Timba singer (as it is customary in Cuban music);
It tells of a man dreaming of walking in the desert, and the adventures he has.
Personally, I rarely remember my dreams, but those who do will probably sympathize with one of the super catchy coros: “cuando estaba en la parte mejor, vino ella y me desperto!”. So, here it is… Disfruten la musica Cubana!

Did you know?
Today, December 4th, is dia del Chango – an important day of celebration is the Santeria religion in Cuba.
It’s also a Friday – the day of the week dedicated to the Orisha Chango.

Chango is the Santeria god of fire, thunder, lightening, war, drums, music and dancing.
He also possess the power of divination, knowing what the future holds.
As a deity of fire,  the character of this Orisha and his “children” (those born under his star) is proud, dignified, brave and intelligent and a fierce warrior.
Before becoming a deity, Chango was the king of the Yoruba land, and thus, for him it is very important to be recognized and respected as a leader.
On the other hand, Chango also represents the imperfections of humans;
He is at time violent, easily annoyed (responding with rage…), arrogant, domineering and a great, manipulative, sweet-talking and lying womanizer, as he also represents the power of male sexuality, virility and seduction.

As the Yoruba slaves in Cuba had to hide their religion behind catholic images enforced upon them by the Spaniards, Chango is syncretized with the catholic saint Santa Barbara.
The daughter of an evil pagan ruler, Barbara was sealed in a tower awaiting an arranged marriage, but during this time discovered the “true faith” (Christianity), and refused the marriage.
For that her father ordered her tortured, and after failing to make her renounce her faith, beheaded her.
Soon after, he was struck by lightening.
Chango is mixed with this saint due to the strong character and pride of holding to one’s faith above all, due to the use of lightening as a weapon to punish evildoers, and dressing in female clothing (one of the pattaki, holy stories of the Orishas, tells of Chango dressing up as the female Orisha Oya, one of his lovers, to escape undetected from his enemies). 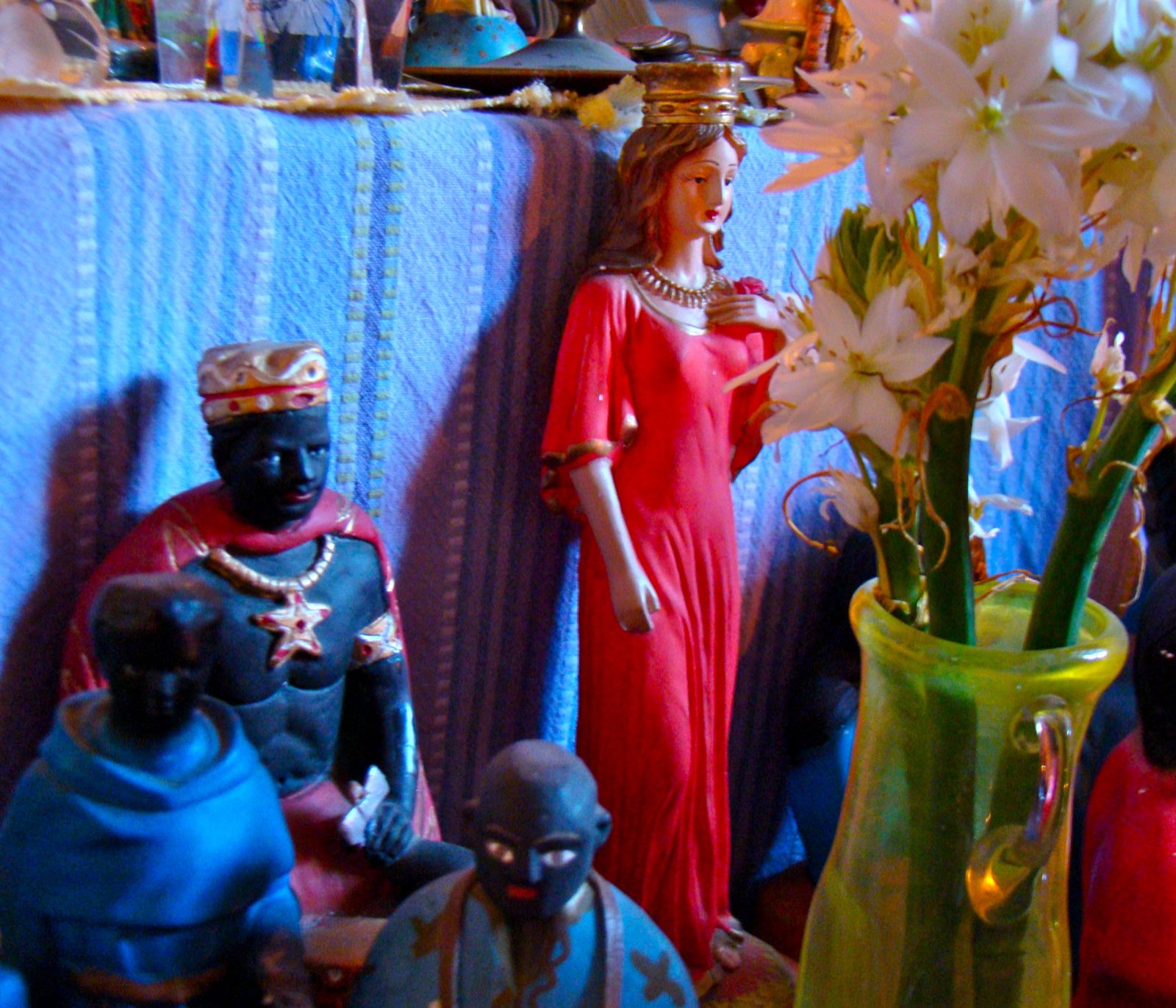 Over the years many bands and orchestras wrote, composed and performed songs is honor of Chango (with the most famous being the classic “que viva chango“).
The song I’m glad to present you today is a fine Timba composition by NG La Banda, one of the most important bands of the genre, from the album “En directo del patio de mi casa”, which came out in 1995, and was recorded as a live concert in Habana!